Muad'Dib learned rapidly because his first training was in how to learn. And the first lesson of all was the basic trust that he could learn. It's shocking to find how many people do not believe they can learn, and how many more believe learning to be difficult. Muad'Dib knew that every experience carries its lesson.
- from The Humanity of Muad'Dib by the Princess Irulan

Hey, whatever happened that that Thursday night with "Teh Tarik Bersama Badut" at NZ Garden, KLCC? I didn't go, because lately I've been having diarrhea every time I get to think about this whole ACK fiasco. AC Mang, The Lord of the Bracelets. I just didn't want to fart or shit in my pants in the same room, if I were to listen and look at that creep... that's all. A meeting from high lord Sauron and attention-starved politician-wannabe Saruman can't be good... ain't it? Anyway, I'm not really that enthusiastic anymore about this whole series of scandalous behaviours shown by psychotic swindling Malays. It's making me sick, man. On one side, there's this Bentley-driving cikai artist who had enriched himself and his cohorts, by selling USD12.50 useless bracelets at RM1000 a pop, and on the other, a glimpse of a Malay-supremacist group headed by a fatso nincompoop who thinks that, since Sauron is a Malay businessman, all we Malays should just be orcs and trolls, and go to Mordor and live happily ever after there. It's just shameful, really. Hey, where's Gollum? Gghoolluumm! Gghoolluumm!
I think I'll just move on, baby. I got so much on my plate, and time is ticking on fast. Pretty soon we all die anyway. At least I've done a little bit of service to those Malays who are smart enough to understand all these. What does it matter if people think that I was making it all up. What does it matter if Saruman loves Sauron, and didn't do his homework, because Sauron is giving Saruman......... whatever? If the government, i.e. KPDNKK is still resting on their laurels and still dragging their feet about all these... what can I do, man? I'm just a lowly CSI guy! I'm not the cop, nor the prosecuter, nor the judge. If my evidence doesn't hold water to those people, so be it. At least I manage to save a few of my fellow Malays who hasn't been involved in this bracelets & neckless thang. Those who took the time to read my blog, double-check on my facts and sources, and insist on being sane in the process... well, I salute you all. Money and riches are so that important ha? My bracelets.... mmyyy prrrreeeciiooouusss!

Yeah... right!
Anyway, 2 of my sources gave me these same series of photos. I heard a few disturbing things that came out of the meeting. I laughed so hard while I was in the john (diarrhea and all... you know), because no matter how absurd it must have been, Sauron and that Saruman is digging their grave quite deep, man. I thought 6 feet was enough, but they insisted on excavating a 20 feet ditch. 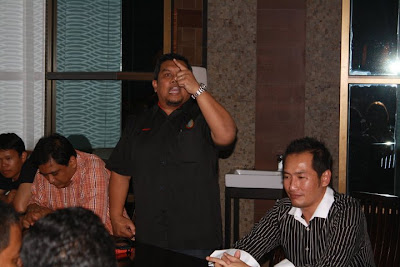 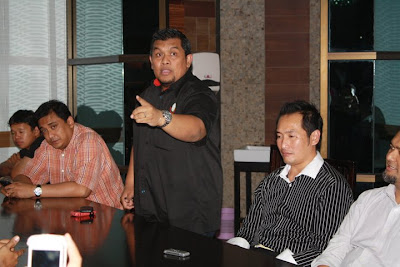 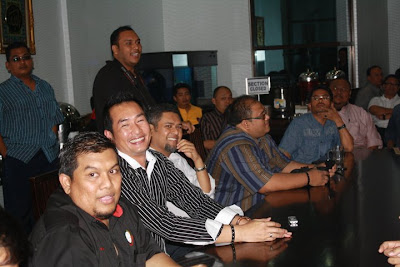 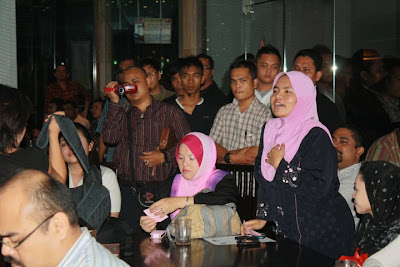 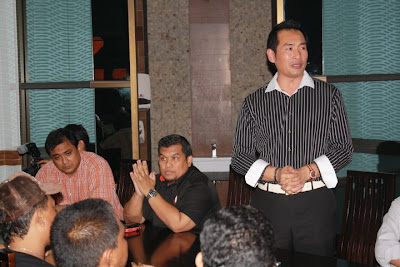 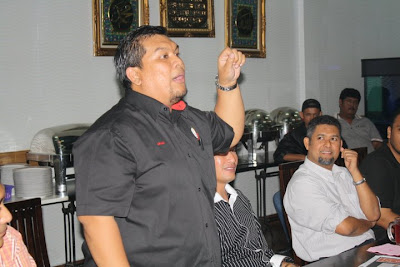 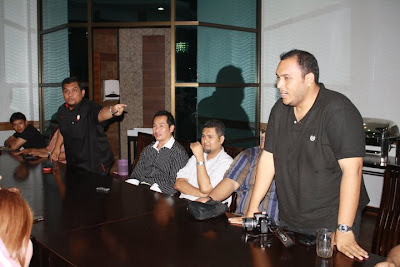 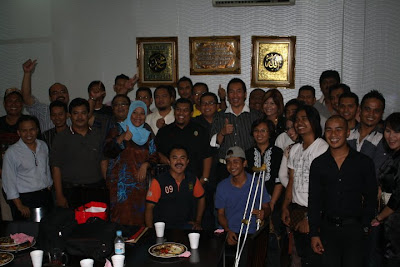 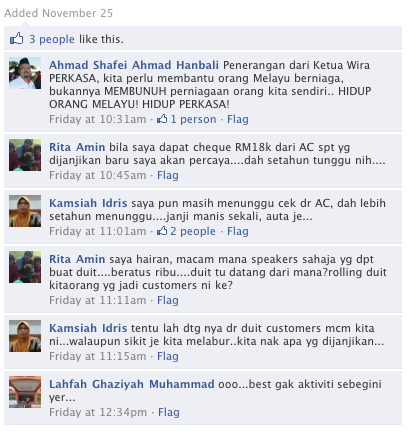 And so it came to be, that some gloriously creepy Malays started hollering, "hidup Melayu! Meh kita belasah sama-sama Melayu Meh!", Because, who else gonna support Malay entrepreneurs, if not all we Malays, ourselves? Ain't that right Armand? Yabedabedoo! Now, go and sleep in that grave. It's big enough, dontcha worry.
Meanwhile, back in Say No To MLM in facebook:

And then, there's this case of a few pretend-cheques (even cheques need actors too) that was highlighted to me by another informer. You know me... if some up-standing young guy do some tedious work researching this issue, I just don't have the heart to let him/her down, and so I will share with you all here, what that said-person had discovered. Everyone loves to be Gil Grissom. 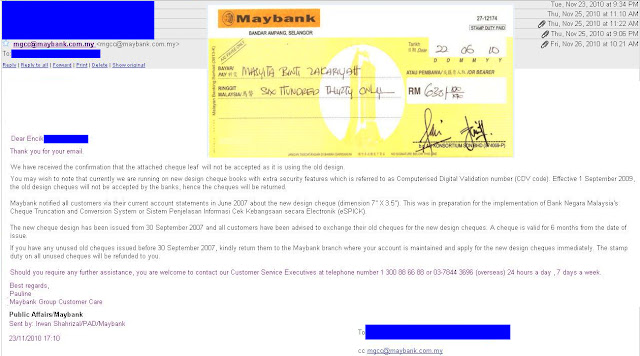 Have a look at the above picture closely (click on it), do you understand the problem with that cheque? That cheque design is already superseded by a newer design since September 2009, by order of Bank Negara. Meaning those kind of cheques are not in circulation anymore, and if Lord Sauron still has it, it'll be useless if he give it to someone. Maybank will just reject it out of hand. But the above picture was screen-captured recently from ACK website... before it went kaput under mysterious circumstances. AC Mang put up the cheque to show out to people that ACK is really paying commission to some really lucky (non-existent) person. And taadaaaa! The date on the cheque is 22 June 2010! Wadefik? Like I said before, if you want to do mungkar - do it all the way baby! And he did it all the way! It is confrimed by now - AC Mizal is the lousiest, stupidest liar I had ever encountered in my whole life... there's no clown like him! First class 4eva!
Dan bukan itu saja... jangan lupa kuncu-kuncu yang sama terencat akal dan berjaya dibasuh gila bab oleh dajjal wang ringgit. Camane tu? You know, jenis manusia yang baru lepas menyamun dan balik rumah dan cakap kat bini... "alhamdulillah, murah rezeki abang hari ni". 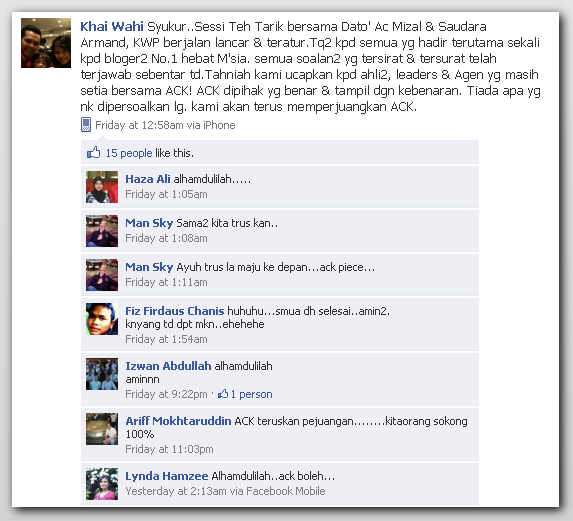 >>>>>>>>>>><<<<<<<<<<<<
<Sigh!> Ain't got much else to say, really. These days I'm kinda busy... so if I don't show up much around the place, please forgive me y'all. You know, it's the school holidays. I gotta spend some time with the kids... all 8 of them. Plus the mother too. She's been a bit cranky lately. And if I were to buy her a Sauron's FIR-neodymium-magnetic bracelet... hohoho! That just wouldn't do babe. No sir! She wants something more substantial, I would think so. And those kids are no easy task too, no joke. The small ones keep bouncing on my tummy one after another, day and night... and that really worsen the diarrhea bad. And the teenage ones want me to buy, 1. A new laptop. 2. An iPad. 3. A make-up set.
All denied! I'm just a rubber tapper - these kids today are crazy!

In these days, darkness falls early,
And people rush home to the ones they love,
You'd better take a fool's advice, take care of your own,
One day they're here, next day they're gone... 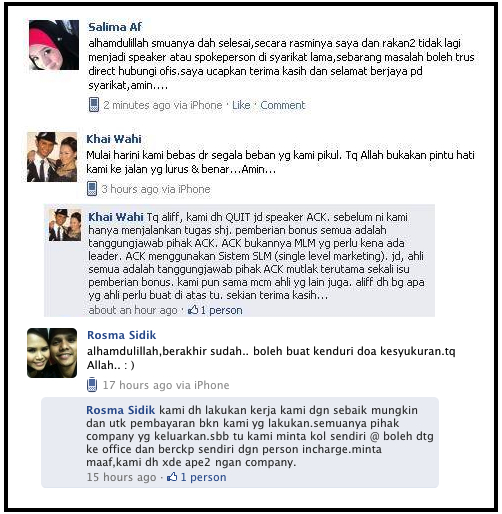 i have to admit bro aidid that
each time i read testimony dari
apa2 la..gua akan pecaya..my anti body
is just 10% to protect from all
this crap..so better solution is
to be stingy..yes..stingy..hidup
orang kedekut..yeah

This is your 1 millionth post about AC, and i'm still entertained. AC gelang business jokes never get old.

But at one point, you'll start to vomit blood and AC will be history. Before then, how bout branching out your anecdotes to other stuff, say the rubber trees you tap?

Well, apart from the usual MLMs.

I salute you too, aidid.

Hoho.. nice dude.. keep diz up.. I really wanna see how deep is he gonna dig his graves..

On a related note, kalu betul diorang pakai pelakon extra as their idiotic manoeuvre in getting the infamous Aidid to expose himself, i'd say betul2 kesianlah. Then again, one can't help but have this subtle curiousity. I'm sure few others do.

How dare those stupid can admit himself as Aidid...an actor that always be themselves.

From my first sight at the cheque, I already know the cheque is ol style cheque that cannot be used since 2 years ago. Is AC wanna fool all educated Malaysian...shame on you AC. Such a bad liar, loser, and low IQ. WTF.

Oh my goodness! I can't believe Perkasa is that gullible! Hmm. Just look at Ibrahim Ali.

Dontokshit ah u dontokshit. Stupidity and racism beyond belief. Asswipe.

Markopolos researched Bernie Madoff's hedge fund as early as 1999 (2008 baru meletup) and came to the conclusion that the consistently high returns tak masuk akal. It was mathematically impossible to ride out the ups and downs. It smells of Ponzi (bukan yang sunday monday happy days...ya makcik-makcik)

He alerted the Stock Exchange Commission in 2001. Diorang tak ambik hek. He kept informing them and to make sure mereka paham takut kalau pakai kias-kias, maksud tersirat tak tersampai, with slightly lesser subtlety he titled his report in 2005 "The World's Largest Hedge Fund is a Fraud".

What finally made the Madoff scam meletup in 2008?

One fine day, in his office, out of the blue he just decided to fess up.

Well, Madoff was once head of SEC or something - and they all thought he was a hedge fund genius... ya genius kelentong orang.
He confessed because he hit a brick-wall, there's no where else to go, the scheme was getting too big for him - USD65 bil too big.

Salam sedara Aidid, don't know how to tell you but i just found out from a blog -->

Wow, Saruman is definitely a midget without his 8'' songkok. I am not surprised if he had opted ACK neckless instead to help him appear less 'midgety'. Mamat ni pengumpul polis report, keje dia asik dok report polis jer about almost anything & everything. He is also the same guy Perkasa sent to lodge a police report in NY & Florida, USA berkenaan isu preacher yg ada intention bakar Quran tu. Enough said, he's out to get cheap publicity... What a joke!!!

Read in one of your entry that AC said his bracelet supplier is Transglobal Magnetic Ltd from London. When I Google this name, below is what I found out......

So sape yg tinggal kat UK can check out the place please......

Hahaha, duit dah masuk semua terus lari. That's the standard MONTH Aidid, anything we're not responsible. Contact someone else, anybody else but them.

Sorry, my mobile corrected my MO to month when the actual msg was MO which is Modus Operandi :P